An Analysis of Digital Marketing Expenses Vs. Election Results

Political parties and candidates face significant challenges in their campaign management. First, identifying the geographical location of their target audience and adjusting the scope of their advertising to the size of the audience in these locations. Second, identifying the opponents’ audience and understanding their strategy. Using the “opponent research tool” created by STOIC we analyzed the campaign expenses of the different parties that ran in the 2022 Israeli elections and compared them to the elections results based on the geographical spread. We focused on the parties’ digital campaigns on Google and Meta and based our analysis on the geographical division they produce.

The “opponent research tool” allows us to identify several important trends in the parties’ marketing strategy, including where, do the candidates think their target audience is located, how much money they spent on digital advertising, and what are their strategy’s guiding lines. Moreover, with the STOIC opponent research tool we were able to identify changes in strategy during the campaign by tracking changes in the allocation of the advertising budget.

Using this analysis, we can derive a number of critical conclusions for running an effective political campaign.

Who spent the most money vs. who won the election? During the campaign, the party ‘Yesh Atid’ spent the largest amount of money on its digital campaign (1.7 million NIS), followed by the ‘Likud’ party (1.29 million NIS). However, Yesh Atid received a significantly lower number of votes compared to the Likud, which won the election with the highest number of votes. ‘HaAvoda’ (Israeli Labor Party) and ‘Meretz’ each spent 650,000 NIS (four times what was spent on Itamar Ben-Gvir campaign), putting them in third place as far as advertising expenses, but they both received some of the lowest voting numbers in the election with Merez not even passing the threshold. This suggests that the Likud digital campaign strategy was significantly more efficient than some of the other parties. 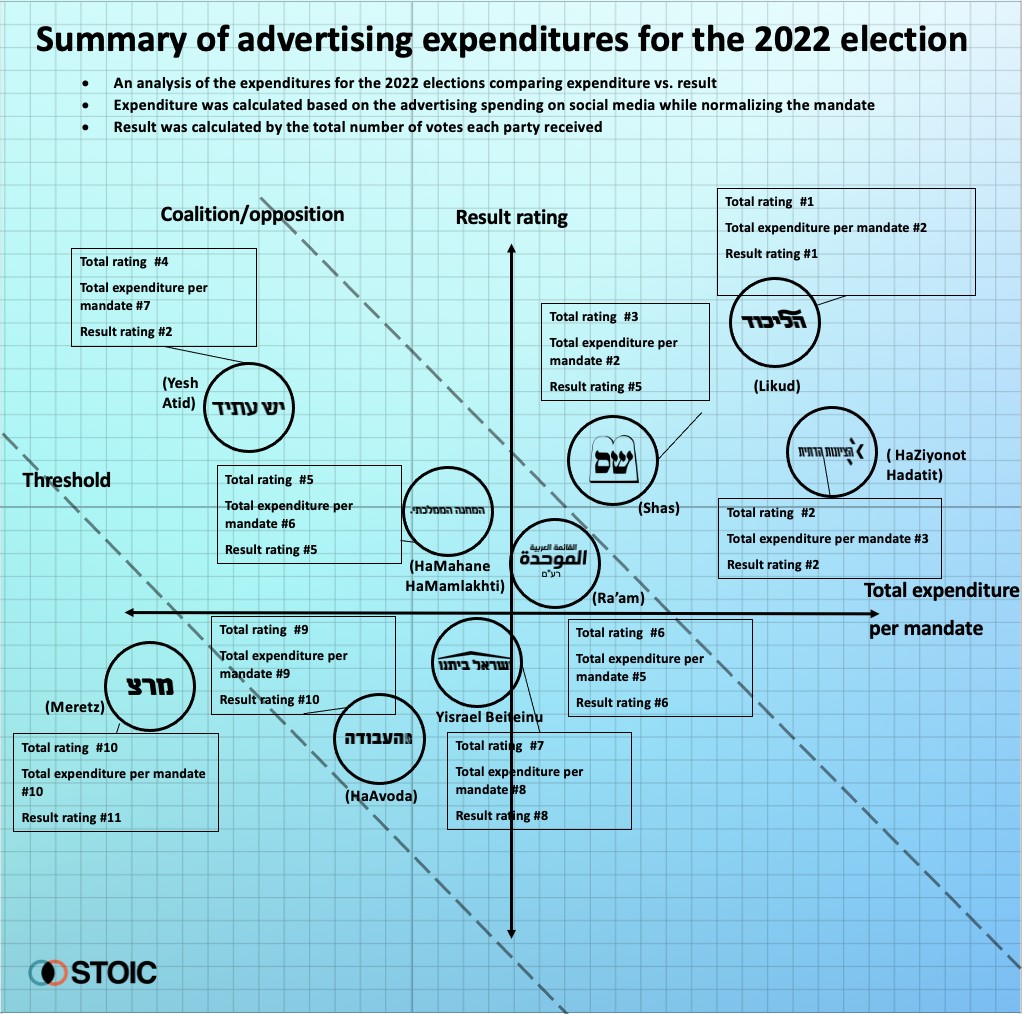 The declared strategy vs. the actual strategy.At the start of the campaign, Yesh Atid and the ‘HaMahane HaMamlakhti’ (National Unity Party) declared that their aim was to expand their block and get votes from the ‘right,’ and indeed at the beginning of the campaign, the advertising budget corresponded with the declared strategy. However, our analysis shows that towards the end of the campaign, both parties abandoned this strategy and instead directed most of their resources towards the center of Israel, the very heart of their parties’ base, rather than trying to win votes from their opponents. For example, Yesh Atid increased its spending in the center and Tel Aviv by 20% in the last month of the campaign. 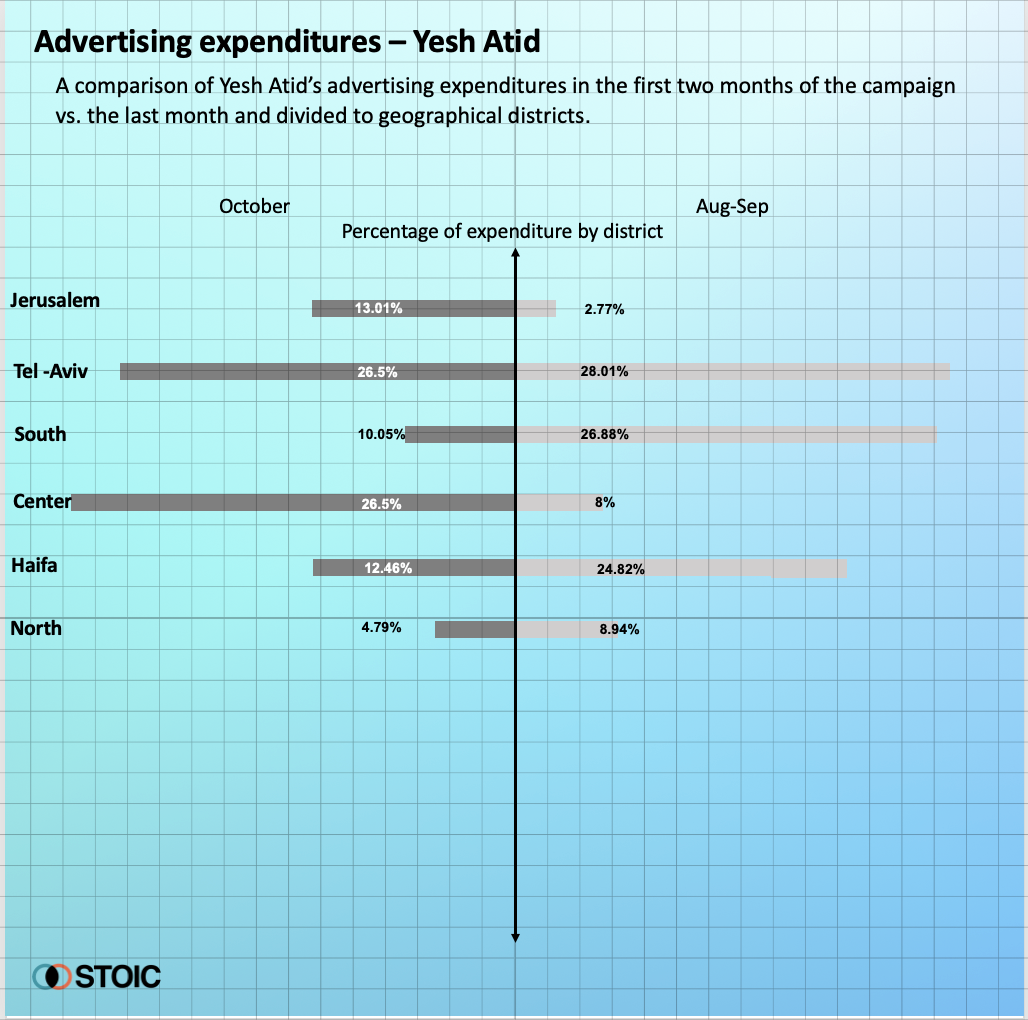 Damage control or random decision-making? The Labor and Meretz also focused most of their efforts in the central district of Israel, ignoring areas that had traditionally been supporters of these parties, like Haifa and the Kibbutzim in the north of Israel. This was reflected in the results, HaAvoda received just short of 6,000 votes in Haifa (a traditionally Labor city), down from the 11,000 votes they received in Haifa in the previous elections.

Compared to other parties, the Labor invested the biggest share of its advertising budget in Jerusalem, which did not pay off, compared to previous elections, the party did not gain additional support in this city. On the other hand, in the last 30 days of the campaign, the party reduced its budget in Tel Aviv, a decision that is unclear considering this is the strongest district of the party.

Some of Meretz decisions are also confusing; it seems that, relatively speaking, the party allocated only a small amount of its budget for promotion in the last 30 days of the campaign (less than 50%). This decision limited the ability of the party to react effectively to its sharp decline in the polls towards the end of the campaign and redirect its messages in a more effective manner with regard to both the audience and the focus of the message itself.

Another peculiar decision was ‘Shas’ investing in a digital campaign in Jerusalem. This was done despite the fact that their party base is a constant, and as ultra-orthodox, they do not use the popular social media sites (Facebook and other social media networks are blocked on the cell phones used by the ultra-orthodox community). Nevertheless, the party invested in digital advertising, 145,000 NIS in Aryeh Deri Facebook page. In the last 30 days of the campaign, Shas increased its investment in the north instead of Jerusalem. But the voting result in the north was low. The investment in the north suggests an inaccurate analysis of where the party voters are located.

Generally speaking, most of Shas’s voters in the last elections were from its base, and the few voters that were not from the party base were not reached through social media. This is confirmed when we look at ‘Yahdot HaTorah’ (United Torah Judaism party) whose base is also ultra-orthodox they had no investment in social media at all, however, they did advertise in a mailing list intended for the ultra-orthodox and a few unofficial campaigns directed at specific audiences to prevent losing these voters to other parties (including women that might have voted for more liberal parties and young man that might have voted for Ben-Gvir)

This is an indicator of the general crisis, within the Left parties in particular, and their disengagement from the field and the voters. It seems that in most cases parties made their decisions ad hoc, out of panic, and with no real guiding strategy. These parties did not know how to adjust their strategy in real time.

Populism and inconsistencies between the message and the target audience. Part of the election platform of ‘HaZiyonot Hadatit’ (Religious Zionist Party) was restoring the “rule of the south” however we find that in the last 30 days of the campaign the party actually reduced its ads budget for the southern district. The Likud on the other hand increased the budget in the south and this seems to have paid off.

The personalization of the Israeli political system. In Israeli politics there is an ever-increasing gap between the party brand and the personal brand of the party head. Investment in personal assets is significantly larger, and constantly getting bigger, than the investment in party assets. This suggests the decline in the importance of the party brand and the raise in the trend of voting for a personal figure instead.

Election funding laws should be enforced or revoked. One problematic issue that arises from the analysis is the funding of advertising campaigns by private companies which is not included in the party official campaign expenses. For example, among some of the private advertisers that stood out the most in these elections was ‘Sela Maier,’ the publishing company that published Benjamin Netanyahu autobiography. During the campaign this publishing company spent about 180,000 NIS, on digital advertising in favor of Netanyahu and the Likud, an amount that equals Ayelet Shake’s entire campaign spendings. However, since this is a private company acting independently, it was not included as part of the Likud official campaign spending, and therefore not part of the analysis we did here. This raises the question, should this expense be reported as part of the Likud official election expenses since this could be considered an illegal founding by a corporation.

Targeted campaigns? We’re not quite there yet. Only a few parties used differentiated digital assets, meaning they used different assets, with different identities to reach different audiences. Most parties used the party and the MP’s social media pages (for example, Merez and HaMahane HaMamlakhti used the MP’s social media for their advertising). A few parties did adjust the use of the asset to the demographic characteristic of the audience they were targeting. For example, ‘Yisrael Beiteinu’ used a page on Facebook in Russian for their Russian voters. Yesh Atid invested 10% of their total budget in a campaign using the Yesh Atid Youth page to target their younger voters. Yesh Atid also invested about 150,000 NIS in advertising in the Arab language, however this was done only in the first two months of the campaign and suggest that the party official campaign directed at the Arab population was a failure.

This analysis indicates a lack of certainty in most political parties in the 2022 election campaign as to where to direct their efforts and resources. Knowing where your audience is located and deleveraging the right message to the right audience is vital for an effective campaign. One of the problems these days is that political parties and candidates still use outdated methods to manage their campaign. A modern campaign operation requires advanced data analysis and management to be efficient and successful.